How to get around China

How to move around in China:

The best way to get around China is by train and plane (generally safe and cheap, ideal for covering long distances).

Once in the cities, it's best to walk whenever you can, and to use the metro or a bike for longer distances. Taxis are extremely cheap compared to Europe, USA and Japan, though many taxi drivers will try and overcharge you. Always take official taxis with a meter or if not, negotiate the price beforehand, that is, if you can make yourself understood:-).

Flying is the best mode of transportation for covering the long distances in China. It's very similar to flying in the West, and you don't even need a printed ticket. All you need is your passport and they will give you a boarding pass during check-in.

In our Smart Route around China we include a link where you can find all possible flight combinations and can book your flight at the cheapest rate. We also help you with the name of departure and arrival airports, something which in China can be the source of a lot of confusion.

How to buy train tickets:

Travelling by train in China is comfortable, cheap and safe. Don't expect luxury; trains are simple, though clean and respectable.

Tickets can be bought either going to a train station or through an authorized agency.

- Direct buy in a train station:

If you are in Shanghai or Beijing, you'll find ticket windows where they speak English (there are signs). In the rest of the cities, you'll need a piece of a paper with all your ticket information written in Chinese on it: point of departure and arrival, departure time, ticket number, ticket class. Ask someone at your hotel to write this information down for you. Passports and cash are a must to buy your tickets!

We recommend you that once in Shangai or Beijing, you buy all the tickets you'll use during your trip. The tickets that don't departure from this station will have an extra charge of 5CNY but it's worth it to assure the availability in all the journeys. Bring printed or written down the details of the trains you want to take (date, hour, departure station, arrival station, type of seat) to make the buy easier. Don't forget your passports.

- Online buy through an authorized agency:

The train tickets in China can be reserved with a maximum of 20 days in advance in www.12306.cn. However, you'll need to know how to speak Chinese and also a credit card from a Chinese bank. That is why it's best to pay a specialized agency so they can make the reservation for you (even if you ask them to make the reservation more than 20 days in advance, they will keep you data and they will buy your tickets once they are for sale).

If you want to use this option because you think it's easier or because you are not in the city in advance enough, then you'll have to request it at least ten days in advance or even a month if you travel during the Spring Festival season, May 1st or October 1st.

There are some important agencies that can do this (China Ticket Online, China Train Tickets, www.chinahighlights.com...) but our favorite one because of its good performance is Travel China Guide. Look in their web the journey and the departure hour, make a request online and they will answer you within 12 hours with the specific timing and price. They charge you 60CNY for a ticket (a very competitive rate), you have to pay with credit card and they give you the option of:

- Picking up the tickets by yourselves: they will send you an e-ticket that you'll have to exchange in a window for a real ticket (you can't travel with the e-ticket that the agency sends you!). You can pick them up in:

- To make them send your tickets to your hotel. To do so, they will charge you 50CNY extra and you'll have to send them a scanned copy of your passports.

Type of seats in Chinese trains:

There are 4 types of seats, although not every train has all of them:

While rare, some trains also have:

Once on the train:

It's a good idea to arrive at the station more than 30 minutes ahead of time, especially in the big stations in Shanghai and Beijing. They're huge and have security checkpoints like in an airport.

Train announcement boards tend to be in Chinese, so it's best to go by the train number (written on the ticket) and the departure time.

Once on the train: 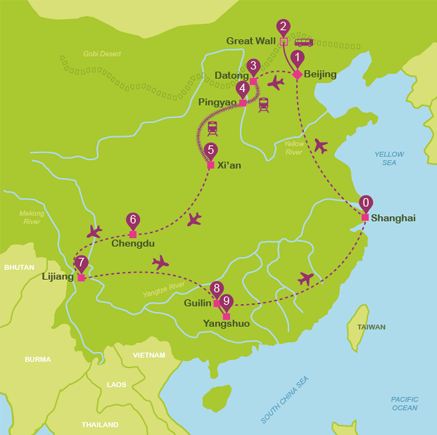 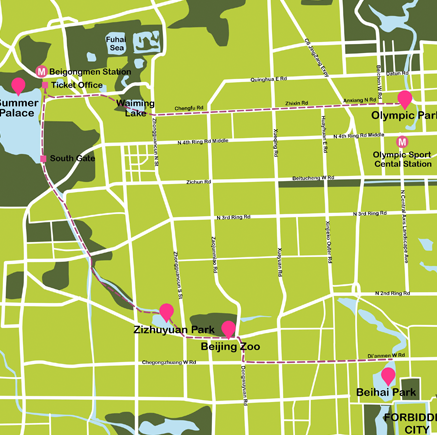 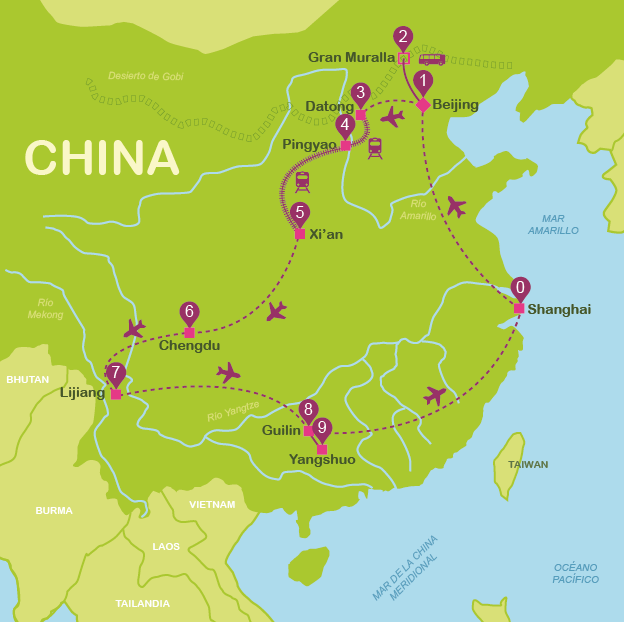